On 5th December, the opening ceremony took place at the university premises and esteemed guests including Dr. Carmen Zita Lamagna, Vice-Chancellor, AIUB, Ms. Nadia Anwar, Chairman of the Board of Trustees, President, Office of Student Affairs, Mashiour Rahman, Associate Professor, Associate Dean-In-Charge (FST), Manzur H Khan, Proctor, Director of OSA, Abhijit Bhowmik, Senior Assistant Professor, Special Assistant of OSA, Sharfuddin Mahmood, Assistant Professor, Special Assistant of OSA, and many more came and unveiled the four-day-long event by cutting a marvelous cake with the participants. The guests interacted with the participants from various schools, colleges, and universities. They also came and checked where all the gaming equipment was set-up.

In PUBG Mobile (Squad), AIUB Cyber Gaming Fest 2019 made a national record with 85 teams participating in the event. Among these teams, “Team Wolves Den” were the champion and “T10 TiTAN” were the runner’s up.

In DOTA 2, A total of 8 teams participated in a double elimination tournament where the champion was “Dark Shadow” and the runner’s up was “ForEverArtRemains”. The champion was decided by whoever won the best of three rounds and “Dark Shadow” claimed the first two rounds of the final match with breathtaking scores of 39-21 and 34-25. During the competition, delegates and foreign exchange students from Malaysia also visited and played DOTA 2 with the contestants and volunteers of AIUBCGF 2019.

In CS: GO, 8 teams participated in a double-elimination tournament where the champion was “Outlaw and Friends” led by “Rafsan the ChotoBhai”, a content creator, food-blogger, and a student. The runner’s up was “Underground Gaming”. Both teams are skilled and have recognition in the gaming community of Bangladesh. Out of three matches “Outlaw and Friends” won the first two matches with results of 16-11 and 16-10.

In the virtual reality game Beat Saber, more than 25 participants attended and the champion was Mahedi Hassan from AIUB and the runner’s up was Abian Arshil Azad from Playpen School. During the event many guests from abroad also came to inspect the VR Lab where “Studio 13” operates all the VR equipment. “Studio 13” also supported the event by giving technical support for the participants.

On 8th December, the closing ceremony was held to thank and award the participants. In the ceremony, Ms. Nadia Anwar, Chairman of the Board of Trustees, President, Office of Student Affairs (OSA), Mashiour Rahman, Associate Professor, Associate Dean-In-Charge (FST), Dr. Dip Nandi, Associate Professor, Director of Undergraduate Program [FST], Manzur H Khan, Proctor, Director of OSA, Abhijit Bhowmik, Senior Assistant Professor, Special Assistant of OSA, Sharfuddin Mahmood, Assistant Professor, Special Assistant of OSA, Anas Khan, Country Manager, GIGABYTE were present to award the winners and runners up of the four-day long event. Mr. Anas Khan delivered a warm speech for all who were present in the room and encouraged them to have confidence in whatever they do. The event was successfully concluded by a group photo with the guests, participants, and the volunteers of AIUB Computer Club. 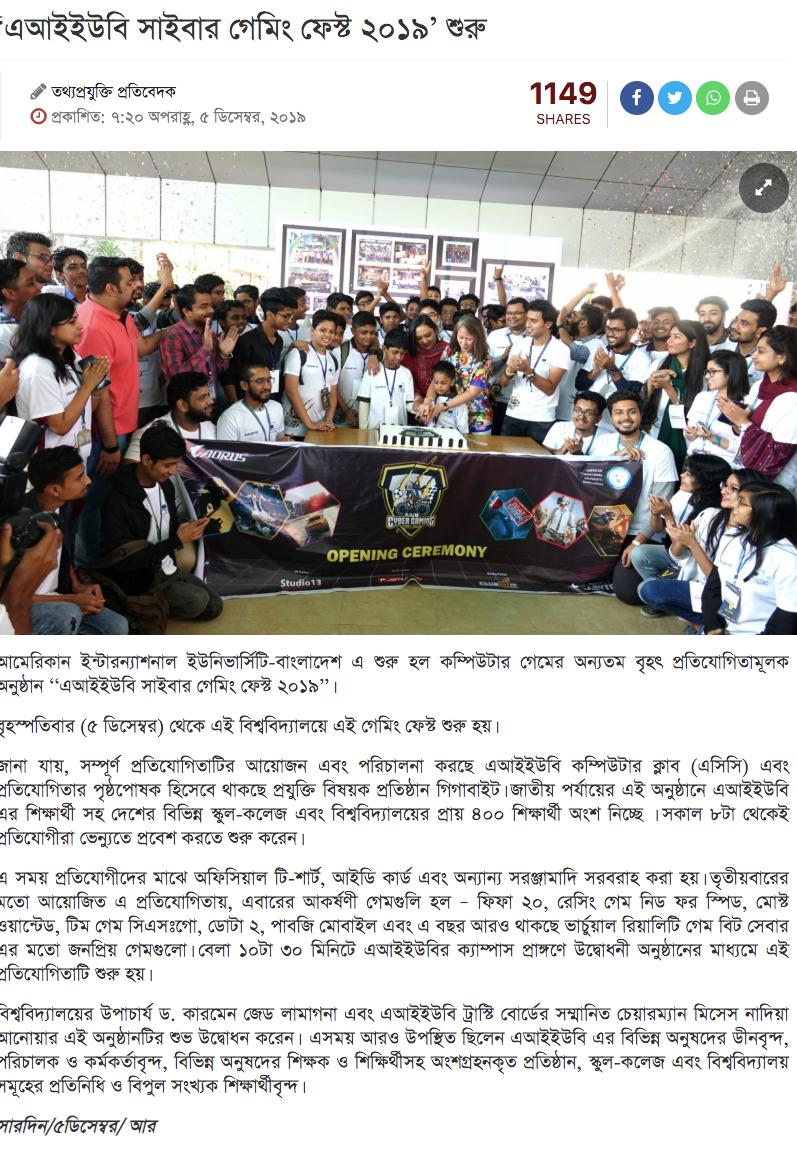 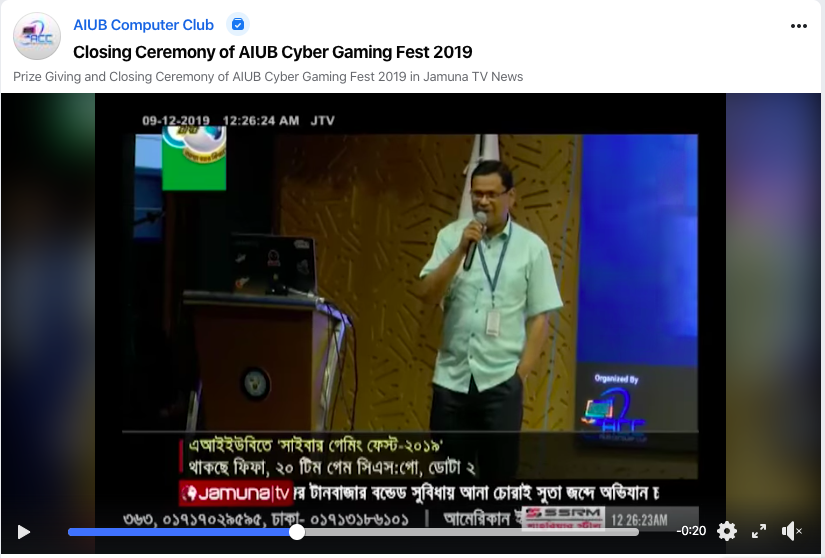